Q: I inherited a Victrola phonograph player from my grandmother several years ago. It’s Victor Talking Machine Co.’s model VV-XI. There are shelves inside the cabinet for storing records and I have a few that are still in good condition. The phonograph worked when I got it, but now the crank handle is loose. Does this have any value? We’re in our 70s and looking to downsize soon.

A: The Victor Talking Machine Co. was founded in Camden, New Jersey, in 1901. It began making the Victrola, a player with an internal rather than external horn, in 1906. The XI model was first made in a tabletop version in 1910. Floor models were first made in 1912 and became the company’s most popular model. Over 800,000 were sold by the time production ended in 1921. The cases came in mahogany (most popular), walnut, oak, and fumed oak. Date your Victrola by the trim on the side posts. A small concave carving was at the top of the posts until 1917. It was replaced by a carved scroll. Your cabinet with scroll carvings was made between 1917 and 1921. The VV-XI model Victrola originally sold for $100, later for $130. Old Victrolas are collectible and sell for a wide range of prices depending on model and condition. If the loose handle is a simple fix, it won’t affect the value. You might sell it for $100 to $200. The buyer may also be interested in records. Or you could take them to a record shop to see if they’ll buy them. Don’t take the Victrola to the dump. Someone might buy it for the parts. 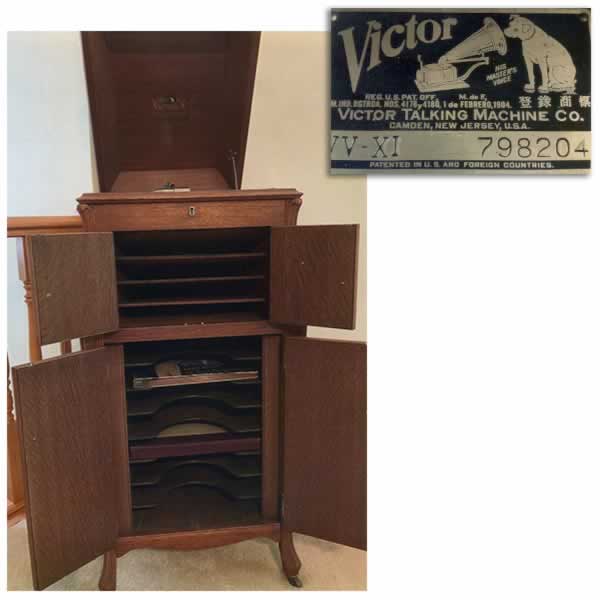