Q: I have a collection of little cloth pictures like this one that I’d like to know more about. They are about 100 years old and they used to come in cigarette packages. I think they are made of silk. I have dozens of them, including a few duplicates. I would appreciate any information you can give me about the value of these items.

A. These are sometimes called “cigarette silks” or “tobacco silks,” although the material is more likely to be satin. They were inserted in packs of cigarettes or could be obtained by sending in coupons stuffed in the packs. The designs came in sets and were meant to appeal to women. The silks came in different sizes and could be sewn together to make quilts or larger pictures. Popular subjects included actors and actresses, animals, baseball players, college mascots and seals, flags, generals, Indians, kings and queens, U.S. presidents, and Hamilton King girls. Some look like little rugs. Most were printed on satin, although some were woven. Coupons or “gift slips” that could be sent in for silks were available in packs of expensive brands of cigarettes or small cigars from about 1912 to 1915. Your Spanish dancer is a premium from Nebo cigarettes. This brand was originally made by a New York City company. Your silk indicates it was made at a factory in New Jersey, so it was probably made after Nebo became part of the P. Lorillard Co. in 1911. These silks usually sell for less than $5. 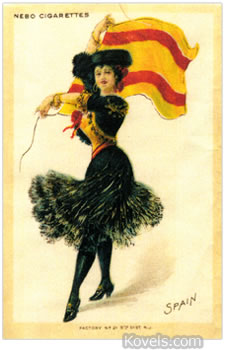 As a new member at the lowest (unpaid) level, I made a comment a while ago. I thought it relevant and kind. I was able to search for it (“silk” yielded the first phrase of my comment) but I have not been able to find its whereabouts. Any suggestions?

Silk is a fiber while Satin is a type of weave(as is Velvet). At the time of manufacture, available fibers were cotton, wool, flax, hemp, nettle or silk. SInce weaving silk threads tends to create a thin, flexible fabric that easily slides into a package, the ‘tobacco silks’ are probably silk thread with a satin weave.

The term “satin” refers to a type of weave, not the fabric content, and can include polyester, acetate, or rayon. “Sateen” refers to cotton that has been woven with a “satin” weave. The term “silks” more accurately describes the cigarette/tobacco silks described in this article. They may or may not have a satin weave, but they are silk.

I have a tobacco silks quilt that was made by someone in my family. The silks are of women from countries all over the world, with their country’s flag. It is about the size of a baby crib quilt, and looks like it has been well used. Unfortunately some of the pictures are faded, having been printed on the fabric. Still, it is a novelty I’d like to keep. Any advice on how to clean it? Thank you.

I have a 21″ X 21″ (excluding lace trim) pillow made from these ‘silks’. One side of pillow only is silks, outside edges are flower silks, interior is State-state flower-lady silks, some duplicates. Silks are edged with flowered ‘silk’ bias-type tape to create the pillow front. My grandmother’s elder sister made the pillow in the early 1900’s I was told.