Q: This glass pistol belonged to my father, who carried it when courting my mother. Horse jacking was prevalent then, and the pistol shown in the moonlight like nickel and frightened a would-be thief. Can you tell me anything about it?

A: O-Pee-Chee Company, also known as OPC, was a candy and gum manufacturing company founded by brothers John and Duncan McDermid in 1911. It is named after Opechee, the robin in Longfellow’s The Song of Hiawatha. The company started out in a paper box factory in London, Ontario, Canada. Some of OPC’s brands were Bazooka Joe, Dinosaur Eggs, Graperoo Gum, and Thrills Gum. The glass pistol must have been an early premium.

In 1933, OPC began making hockey cards and including them in packages of bubblegum. Baseball cards were first included with O-Pee-Chee gum in 1937. After World War II, an arrangement with Topps allowed O-Pee-Chee to print and distribute Topps sports cards under the OPC name in Canada. OPC also made non-sport cards, including Batman, the Beatles, Star Wars, movie stars, Garbage Pail Kids, and Wacky Packages, but it is best-known for its hockey cards. In 1992 OPC began selling hockey cards without the gum. The company was bought by Nestle in 1996. 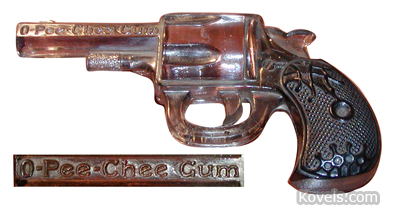