Q: This curling iron belonged to my mother many years ago. I’m in my 80s and can remember it well from my young years. It’s marked “Marcel” on one handle and “Germany” along with a capital “C” on the other. Can you tell me how old it is and its value?

A: A Marcel is a type of curling iron used to set the hairstyle of the same name. In 1872 Francois Marcel Grateau invented a hairstyle that became known as the “Marcel Wave.” Deep waves, not curls, were made in the hair by using a special tong-like iron. The earliest curling irons were made in France, but later they were also made in Germany. The iron was heated over a gas burner or stove. Since there was no way to regulate the heat, hairdressers tested the iron on a piece of paper to be sure it wasn’t too hot before using it to style a customer’s hair. Marcel irons came in four sizes: A, B, C and D. Your iron is size C. Irons that could be adjusted to change the sizes of curls were introduced in 1933. Electric irons were first made in the 1920s, but non-electric irons continued to be used until the late 1950s. Old curling irons are not easy to sell and bring $10 to $20. 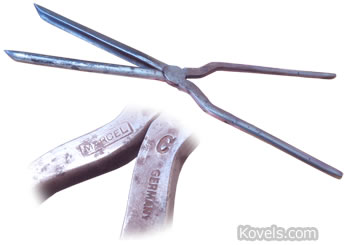