Q: We have an anti-Hitler political pin made by Evans Novelty Co. of Chicago, Illinois. There is a picture of Uncle Sam holding a rope and standing in front of a tree. There is a sign next to him that says “Let’s Pull Together.” When you push a tab on the side of the pin, Hitler’s head with a noose around it pops up from behind the sign. Would this be worth anything?

A: Patriotic, pro-America, and “anti” pins, posters, cards and other items were produced in great numbers after the United States entered World War II in 1941. Evans Novelty Co. made these mechanical anti-Hitler pins in 1943. They are made of lithographed tin. The company sold them to distributors on display cards of 24 pins each. The pins usually sold in stores for 10 cents. They were also sold individually on cards with the slogan “Let’s Pull Together and Hang Hitler” on them. Your pin is one of at least three versions that were made. The earliest version doesn’t have a tab but has a hole in the tree branches and another hole near the bottom of the pin. A red string is tied around Hitler’s neck and threaded through the top hole, down the back of the pin, and out the bottom hole so Hitler’s head pops up when you pull the string. A later version has the string tied around a tab on the left side that moves Hitler’s head up and down. The pin sells as a political collectible for about $90. 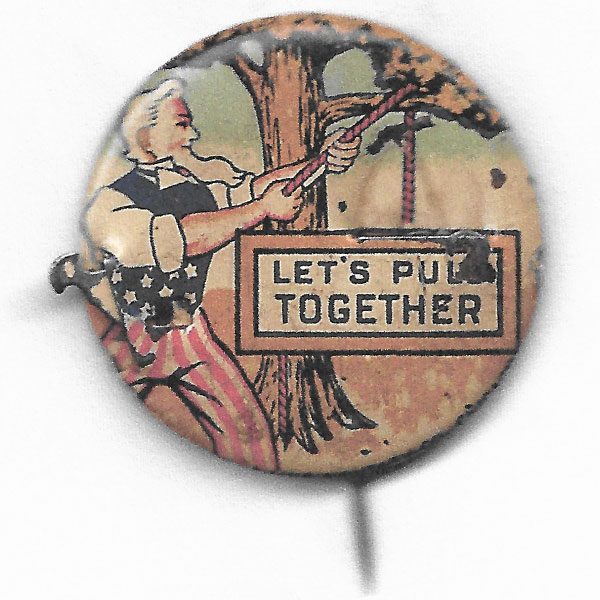 One response to “Anti-Hitler Pin”