Q: We found this building set in the old toys in a garage sale. We thought they were “Lincoln logs” but the name on the box is “American Logs.” It lists the maker as “Halsam Products Company, Division of Playskool Manufacturing Corporation.” It is set No. 825 and says “approximately 200 pieces.” What can you tell me about them?

A: Both American Logs and Lincoln Logs building sets were made by Chicago companies and include notched wood “logs,” green roof “boards,” and red chimney pieces. Lincoln logs are smooth and round, while American logs are square and look rough hewn. Lincoln logs were designed by John Lloyd Wright, son of architect Frank Lloyd Wright. They were made by his company, the Red Square Toy Company in Chicago, beginning in 1916. The name “Lincoln Logs” was trademarked in 1923. Halsam Products Company, a manufacturer of wood toys, was founded in Chicago in 1917 by Harold Elliot and his brother-in-law, Sam Goss, Jr. The company name is a combination their first names. Since Lincoln Logs were sold only through Montgomery Ward’s mail order catalog, JC Penney asked Halsam to make a similar building set for their mail order catalog. Nils Paulson, a Swedish engineer, designed the building set for Halsam. It was patented in 1936. Lincoln Logs didn’t sell well in the South, so Halsam chose names with wider appeal. “American Logs” were also sold under the names “Frontier Logs” and “Walt Disney Early Settlers Logs.” John Lloyd Wright’s company was sold to Playskool in 1943. After many ownership changes, in 2017 Lincoln Logs was purchased by Basic Fun, Inc., of Boca Raton, Florida. Halsam was sold to Playskool in 1962. After several changes in ownership beginning in 1968, production of American Logs ended. Value depends on condition and the number of pieces in the set. A set of American Logs like yours sold recently for $35. If the set is missing pieces, it would sell for less. 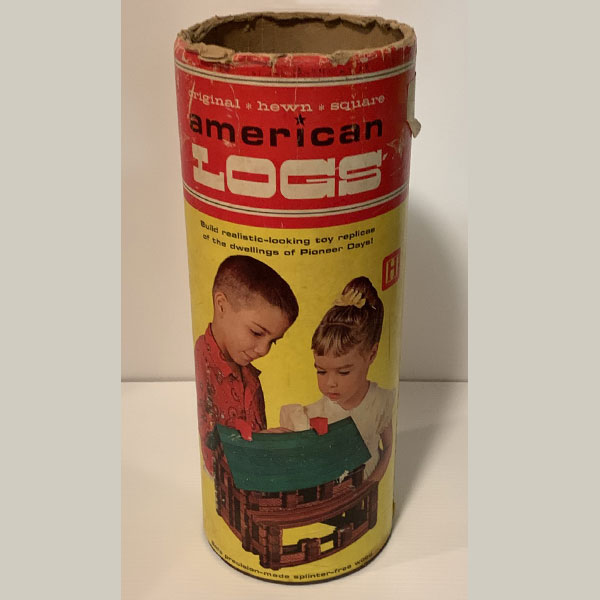