Q: I have a 1900 The Southern New England Telephone Company Phone Book. It says on the Front “Corrected to July 1,1900.” It’s complete and in fair condition. The front cover is held on with tape. I bought it in 1980 for $12.25. What do you think it’s worth? I’ve checked everywhere on line and can’t find one.

A: The world’s first telephone directory, a one-page sheet listing 50 business and residential “subscribers,” had no numbers. It was published on February 21, 1878 by the New Haven District Telephone Company. The company started in New Haven, Connecticut, on January 27, 1878, and founded the first telephone exchange. It became the Southern New England Telephone Company in 1882. The Southern New England Telephone Company (SNET) is now part of Frontier Communications. An 1878 telephone book published later that year sold several years ago for $170,500, but later phone books sell for about $25 or less. Because yours is in poor condition with tape repair, it’s not worth that much. You might consider donating it to a historical society. 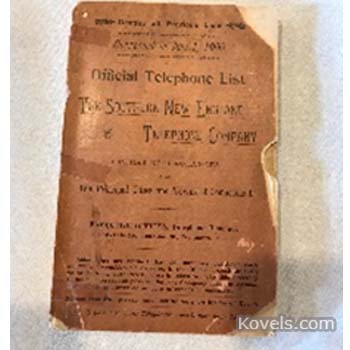