Every December, Miami comes alive with art fairs. Local museums open new shows, more than 15 art fairs sprout up, galleries show new work – all to entice the approximately 75,000 visitors who come to Miami to buy art and design works. It’s a great time to catch up with old and new design trends at Design Miami. In the main art fair, Art Basel in America – Miami Beach, there is frequently a buying frenzy for the multimillion-dollar paintings. But this year the excitement started the opening day at Design Miami.

KAWS (Brian Donnelly), the cartoon artist/painter who creates the cartoon-like dolls that everyone loves, partnered with the Campana Brothers, Humberto and Fernando, known for their chairs created from multiple toys, wood, rope and other objects. Their collaboration resulted in two limited-edition chairs and a limited-edition sofa. Each chair used 75 KAWS dolls that individually cost about $100 new, if you are lucky enough to get one. They sell on eBay for about $700. The Campana brothers used the dolls to create the seat and back of the chair, removing eyes, legs, arms or other body parts as needed. The fair opened at noon and by 12:30, all 50 chairs ($75,000 each) and 8 sofas ($120,000 each) were sold and more than 30 people had put their name on a waitlist – a first for a design fair!

Another dealer spent six years acquiring furniture designed by Karl Emanuel Martin (KEM) Weber (1889-1963) in 1934 for Disney Studios. Kem Weber was the main architect for the Walt Disney Studios in California. Our favorite piece was the sleek looking “Airline” chair. Only 300 were made, although the original plan was mass production. They were designed to ship in pieces and for easy assembly.

We went to southern France in the late 1960s where many famous artists were working. You could buy Picasso plates for $5 to $25. We didn’t visit the Jean Cocteau studio while there, but we wished that we had. It was a treat to see 64 of his plates, manufactured by Atelier Madeline-Jolly, gathered together for the show by Lebreton Gallery. We couldn’t decide which was our favorite. The prices were based on the edition size – from 5 to 50 plates. The Cocteau plate pictured has a stylized hand in the sign language symbol for “I love you” holding a big eye, with a sketch of Villefranche, a fishing village on the Mediterranean he frequently visited. The plate was selling for $24,000.

The Bass Museum of Art featured a show by the Haas Brothers, twins Nikolai and Simon. Who wouldn’t enjoy their unique creatures? Contemporary design company L’Objet collaborated with the Haas brothers and made a line of dishes and objects. They had a pop-up booth at the museum that sold out, but more will be available after March 2019. 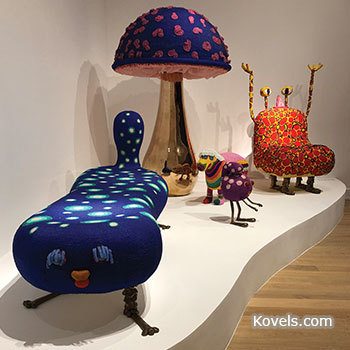 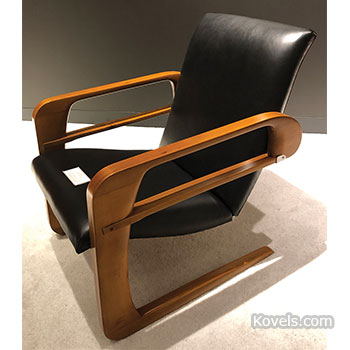 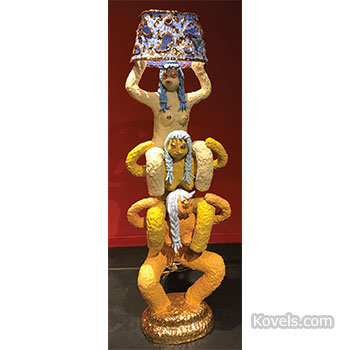 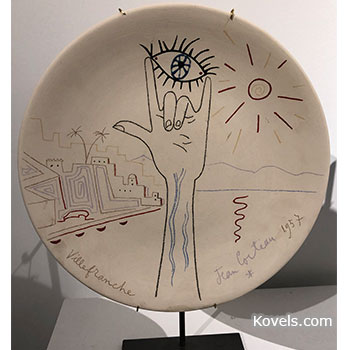 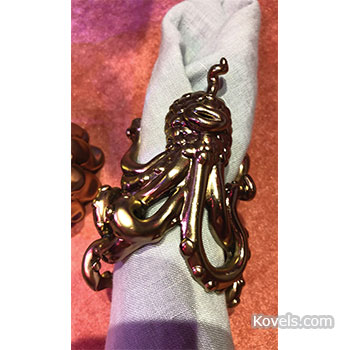 L’Objet and Haas Brothers collaboration, napkin ring, one of four, $265 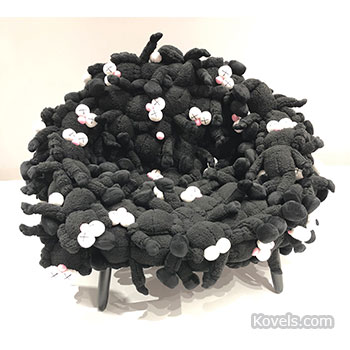