After completing a seven-year apprenticeship at the Fulham Pottery in 1812, John Doulton moved to a small pottery in Lambeth, South London. He became a partner three years later, and in 1820 the firm became Doulton and Watts. Doulton and his three sons formed Doulton and Company in 1853. Doulton was making art pottery by the 1870s, and well-known artists, including Hannah Barlow and George Tinsworth, were working at the pottery. Many pieces were one-of-a-kind. It began making fine bone china under the name Doulton and Co. in Burslem, England, in 1882. Doulton made tableware, vases, and ornamental pieces using talented artists and new techniques, including raised gold outlining and on-glaze enamel painting. Decorative figures were introduced in 1893. Doulton continued to make earthenware pottery, like flowerpots, kitchenware, and spittoons.

Wilton Rix patented Marqueterie, an unusual ware produced from about 1887 to1900, made from slices of clay of different colors put together to appear marbleized. Lambeth Ware with incised designs of animals and birds was made by Hannah Barlow. Persian Ware white tiles, produced between 1884 and 1900 and again between 1919 and 1922, were influenced by the art pottery of William de Morgan. They were decorated with Near Eastern designs in turquoise blue, green, and orange. Doulton’s art pottery included stoneware, silicon ware, Carrara ware, and majolica.

In 1902 the Royal Doulton era began. King Edward VII honored Doulton by granting it the right to use the word “Royal” to describe its wares, and the name Royal Doulton appeared in its marks. The factory is still working and still making the figurines, character jugs, and animal figures so popular with collectors today. Art ware and tableware continued to be made, but tastes were changing. Dull-colored salt-glazed ware was out of style. Shelves filled with vases and figurines popular in Victorian times were no longer fashionable.

Rouge flambé ware, with its impossible-to-miss red glaze, was first shown in 1904. Vases with this red transmutation glaze that changed to blues and blacks in random patterns were one-of-a-kind pieces. Later, animal figures were covered with the flambé glaze. Rouge flambé pieces are still made. Sung ware (1920–early 1940s, with a very few made later) and Chang ware (1925–early 1940s) were covered with a thick, dripping transmutation glaze in flambé colors determined by the kiln. From 1924 to 1930, a series of jugs, ash pots, and tobacco jars reminiscent of old Toby jugs were made. Other art wares developed before 1950 include pieces with crystalline glazes from the early 1900s until 1918, Titanian ware, and Kingsware. Titanian ware, made from about 1915 until the early 1930s, was a thin porcelain in pastel colors –greenish grays, smoky blues, and mellow greens—with mottled and clouded effects. It pictured landscapes, flowers, birds, and animals. Royal Doulton’s line of Kingsware was produced between about 1898 and 1939. Kingsware was not thrown on a wheel, but made from slip poured into plaster molds. The body of the piece was a dark brown slip, and low-relief designs were made from colored slip. The piece was finished with a transparent ivory glaze. Kingsware came in a variety of shapes ranging from jugs and mugs to coffeepots and candlesticks, but the most collectible are the whiskey flagons. 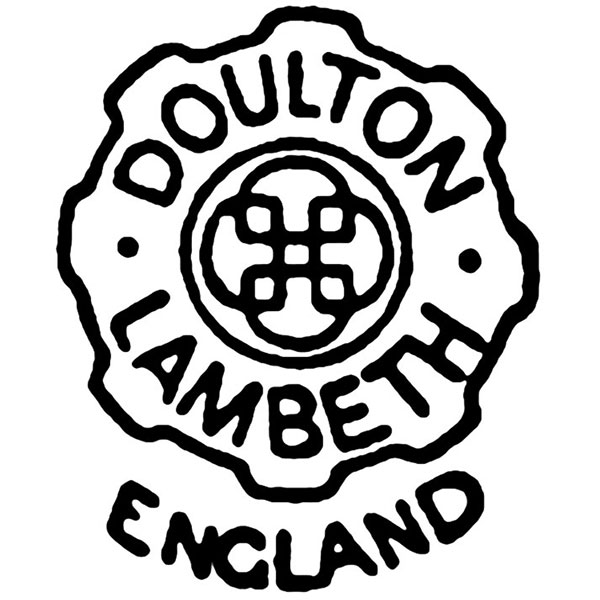 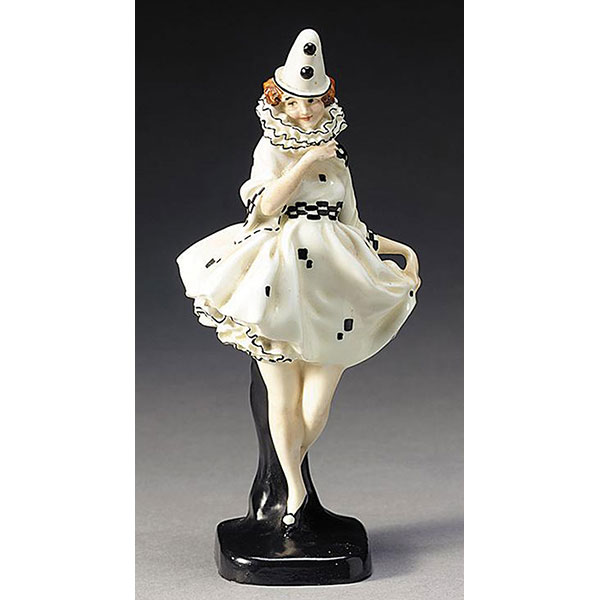